In 1966, Mr Or Kim Peow established Or Kim Peow Contractor, a sole-proprietorship engaged in civil engineering activities. The PWD was its first customer and the work scope for PWD involved upgrading of mud tracks in the rural parts of Singapore to asphalt roads. The contract value of each of these upgrading projects was generally less than $50,000.

On 26 August 1977, OKP was incorporated as an exempt private company to take over the business of the sole-proprietorship.

Following its incorporation, OKP began to undertake a wider scope of civil engineering and infrastructure construction activities including the construction of urban and arterial roads, expressways, vehicular bridges and flyovers as well as the maintenance of roads and road related facilities. 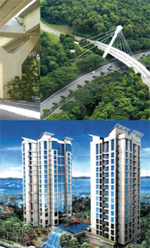 In 1992, OKP was awarded its first flyover project with a contract value of approximately $17.3 million. PWD continued to be OKP's main customer until 1995 when the Roads and Transportation Division of the PWD merged with three other public sector entities of the then Ministry of Communications, namely Registry of Vehicles, Mass Rapid Transit Corporation and Land Transport Division, to form the LTA. Since then, LTA has been OKP's main customer.

On 24 November 1992, EL was incorporated as an exempt private company to take over the business of the partnership. In 1995, EL was awarded a road widening project along Middle Road between Selegie Road and North Bridge Road, with a contract value of approximately $1.5 million.

In 1992, EL was registered as a G1 civil engineering contractor. It was upgraded to G3 in 1993, G5 in 1995 and G6 in 1998. The G6 grading enabled EL to tender for public projects with contract values of up to $30 million each. EL's main customers are LTA, ENV, JTC and PUB. In 1997, EL was awarded a one-year road maintenance project for the North and Urban Central Division with a contract value of approximately $15.6 million. Over the last three years, EL had successfully completed four major projects, with an aggregate contract value of approximately $5.8 million, relating to roadside drain improvement works awarded by ENV and JTC.

Under the revised CRS, with effect from 1 July 2002, EL is graded as a B2 civil engineering contractor and is able to tender for public projects with contract values of up to $10 million each.

OKPTM was incorporated on 18 March 2002 to provide technical management services to road construction companies in Third World or developing countries including technical supervision for road construction projects, recruitment of general workers and sourcing for construction machinery and equipment

Please read our General Disclaimer & Warning carefully. Use of this Website constitutes acceptance of the Terms of Website Use.
Copyright © 2021. ListedCompany.com. All Rights Reserved.
Valid HTMLValid CSS